SANDERSON STEWART NAMED US CHAMBER OF COMMERCE DREAM BIG: SMALL BUSINESS OF THE YEAR FOR 2014 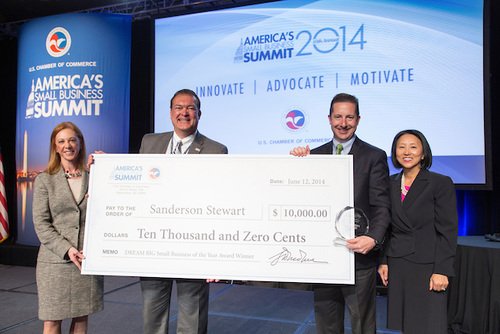 It seems that Big Dreams really do come true. Local engineering and community development services firm, Sanderson Stewart, was chosen by the U.S. Chamber of Commerce from a record number of applicants as the Small Business of the Year today at the 10th Annual America’s Small Business Summit in Washington DC. It is a huge honor to be the only Montana-based business, much less to win the top prize, amongst the 100 remarkable companies recognized as Blue Ribbon Winners this year.

In February, Sanderson Stewart was notified that they were selected to be one of the 100 Blue Ribbon Award winners after being nominated by the Billings Chamber, where their corporate headquarters are based. In March, they were selected as one of the 7 regional finalists for the DREAM BIG Small Business of the Year. Representatives from the firm traveled to Washington DC to participate in the 10th annual America’s Small Business Summit and learned that they won the big prize. After the awards ceremony, Michael Sanderson, President and CEO, said, “Wow! The number one small business in America! It’s such a tremendous honor for our exceptionally talented and dedicated team, who are truly the best of the best. So it’s very, very satisfying to see them get recognized on the national stage.”

From humble beginnings in a Billings garage, Sanderson Stewart was incorporated in 1969 and has since grown to become a regional, award-winning firm with 70 professionals in Billings, Bozeman, and Plains, Montana; Williston, North Dakota, Twin Falls, Idaho, and Denver, Colorado. Following its core purpose, “To Plan and Design Enduring Communities,” the company has evolved from a traditional civil engineering and land surveying company into the go-to firm for land development services in the region. While the firm’s success has been tied to the various periods of growth and decline in the local economy, the firm has grown through it all to become a strong and stable presence in the communities it serves.

The company’s President and CEO, Michael Sanderson; Chairman, Rick Leuthold; and Director of Marketing, Kari Andren were in attendance at the Dream Big Awards Luncheon to receive the award. The DREAM BIG Small Business of the Year Award is sponsored by Sam’s Club®. It celebrates the success of small business and honors its contributions to America’s economic growth. In addition to the recognition for Sanderson Stewart’s professional accomplishments, community leadership, philanthropy, customer service, and employee relations, they received a $10,000 cash prize.

No word on how the cash prize will be allocated, but surely some of it will be going towards some champagne for the Cool, Smart, Talented People (CSTP) at Sanderson Stewart to celebrate their Big Dreams coming true!